Jim takes his Campaign to Pondside 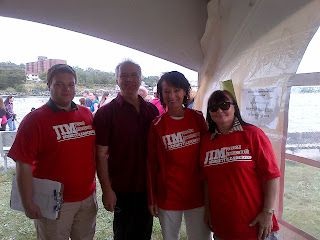 The 2013 St. John’s Regatta was yet another exciting day for the community.

It was also a fun day for Team Jim Bennett!

Our Candidate and a number of supporters (sporting red t-shirts) strolled pondside for most of the afternoon taking in the sights and sounds (and food!)  of the Regatta.

Jim visited a number of sites including the Newfoundland blue mussel tent hosted  by the Newfoundland Aquaculture Association (NAIA) which were proudly providing samples of their organic mussels – the first in North America!

Kudos to the Nurses Union - which hosted a large tent for our seniors!  Jim dropped in for a tea, cookie and a chat with a number of the seniors and the wonderful  volunteers.

Along the campaign trail Jim crossed paths with other Leadership hopefuls like Paul Antle and his wife Renee,  out strolling their two beautiful children.  It was a chance for the two candidates to engage in some light-hearted conversation.

Everywhere he went, Jim was well-recognized and many  people came up to congratulate him on his leadership aspirations.  All in all,  a successful and fun day at the oldest race event in North America!