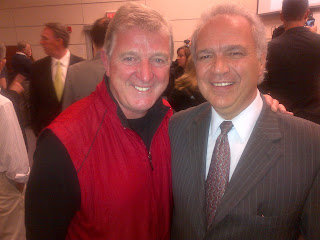 Sometimes a political debate isn't always about one candidate or the other candidate. Actually, it can be about the person in the audience. Which is exactly what unfolded at last night's MUN Liberal Leadership debate at the Bruneau  Innovation Centre on MUN's campus.

Jim Bennett used the opportunity in his closing statement to recognize a special Liberal in the audience - that of former Premier Roger Grimes.

"Imagine the injustice of being Roger Grimes?" he intoned to the audience.

Our Leadership candidate took himself outside the fray of the debate (and used his 2 minutes when he could have been praising himself) to highlight  another strong Liberal who has been trampled by the Tory government and given a lot less credit than he deserved.  Jim showcased Roger to underscore how our Liberal Party has achieved so much, and to remind us how we must remain proud of our Red Boots and Roots!

It was unexpected, but it was vintage Jim - quick on his feet, outside the box, gracious and selfless. Across 5 decades, Jim has always been a Party man and tonight he  showed what a true Leader must and always do - place his Team first and himself second.

As one observer noted after the debate - He is a class act...

Indeed! and that is why we are proud to be part of Jim's team!